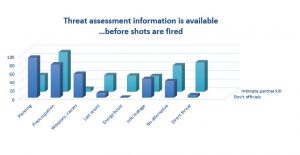 Despite news quotes that may say shooting events are “almost impossible to predict” (former HHS secretary Janet Napolitano). The opposite is almost always true.

The eSleuth part of that process is gathering evidence from computers, phones and social media that can provide a basis for preventative action.

Case study: A killer at school

A local school district with sharp staff called us to help investigate a possible threat situation. Parents of a student heard that a teacher, Stephan Kaufman, was inappropriately contacting students. The school district wisely took action that included a forensic analysis of computers used by Kaufman. Fortunately, Kaufman was fired from the district before any students were harmed.

Sadly, months after being separated from the school, he reestablished contact with a student, ultimately murdering her.

Despite having a good threat response that likely saved many students from harm, a life was lost.